I’m also a stickler for the details but this one got by me until Sir Pinkalot pointed it out to me at the Breeders’ Cup last week at our annual 365 Club meeting.  I have to lay out the circumstances first.

When you walk into the pristine grounds of the Great Race Place called Santa Anita, you have to take a breath when you see the sights and sounds of the race fans.  Trevor can be heard on the track speakers facing the grandstand as you pass by the paddock.  Not a leaf out-of-place, security abounds, handicappers handicapping and Lady Tator in hand.

Then you come to and see a very beautiful young woman, there always is a beautiful young woman I guess because an ugly old man would ruin the ambiance, who greets you with a lanyard for your classy seating badge and a free, even though it says, $5.00, daily racing program.  Don’t get this confused with the Daily Racing Form.  This is better, it’s shiny.

Inside the gem of a tabloid is everything you need from wagering instructions, Bobby Flay’s restaurants locations, colorful advertisements, engaging track stories and the full spread of race information for the entire day.  A novice’s bible of sorts on how to pick ’em.  Damn, can’t beat this with a dead horse because it’s not only a prized item, it’s free!

Twenty feet further in is a booth which sells the day’s official Daily Racing Form in the new magazine size format and only costs $5.50 on track.  Off track for some reason costs another 50 cents.  Never really understood that but it is what it is.  All I know is who sold them was again, a beautiful young woman.

This dull-colored printed paper product is what the experts use.  It’s better and is considered the holy grail of better than average handicappers.  Heck, The Mayor buys one every day of the year.  Inside are each race’s information, plus consensus picks, Beyer, pronounced, ‘Buyer’, Speed numbers, and all the great Past Performance data to help the handicapper make better and more successful picks.

The program is a clone with better paper and pictures plus all the Past Performance information and even those extras like the famous Beyer Speed Figures too.  The program is so nice.  It’s a souvenir not to be tossed away like you do with the Form.

You could compare the two by buying a Penthouse magazine and then going and find a free paper stand on any corner and pulling out an adult paper tabloid.  One is a lot shinier and I never threw away a Penthouse that I can remember.  They all were stolen, they were that prized.

How many people you say?  Wow!  I wonder how many bought a form when you had the free program with everything you need to place educated bets.  I’ll tell you how many didn’t.  All the novices because why would they.  How many are novice?  The answer is simple.  Most.

Now, The WiseGuy is not a novice and is not an expert like Andrew Beyer or Steven Crist.  If I was, I would have an article on page 4 and 5 of the form as they did on Saturday’s.  These guys are good.  Hell, Mr. Beyer invented the Beyer Speed Figures and DRF supports them with favor.  Sir Pinkalot uses them religiously in his method of handicapping as does The Mayor.

How many novices use them?  That answer is also simple.  Everyone, excluding those who pick a winner by the name of the horse, the color of the horse, the gender of the jockey or if that beautiful steed happened to take a load off while walking in the parade.

I used to pick dogs at the track if they stopped in mid stride, hunkered down and strained as if no one was looking.  Never won a nickel doing it that way but I didn’t have Beyer Speed Figures for that and the rabbit was the fastest anyway.

The WiseGuy ROD handicapping popped the first trifecta and I was filled with adrenaline and excitement.  I was back even from the losses on Friday and had an extra 50 bucks to pad the bankroll for the Pick 4.

Now the Beyer Speed Figures are used in the ROD method and are basically a filter.  Lower than a certain number and the programming tosses out the race for that particular horse faster than a fat kid in a dodgeball game.  For the Breeders’, the magical number was 65.  When playiing Turf Paradise, the silver bullet is 15.  Big difference in horses I guess.

Pinkalot actually tallies these figures among other factors and comes up with a value that rates his picks.  Hey, I’ve seen it work time and time again for quite awhile.  Trifecta after trifecta with a couple of superfectas for dessert.

I paid little attention as everyone was talking and all I could actually hear through the crowd noise was my tinnitus.  Take a look at this short I made even though Big Red tried to sabotage my creativity.  Listen to the noise if you don’t believe me.

This time he caught my attention as he faced me directly and made sure I heard.

“The Beyers are different in the program than in the Form.”

“Give me that,” I said as I reached for the shiny book of enormous value.  “That can’t be unless the horse ran a different race and you’re still dizzy from last night beer pong tournament.”

The party the night before was hosted by Adam, who by the way is the proud owner of Party Pong Tables, just click below,

and is obviously a super athlete at the presdigious game because everyone in the room was drunk from missing and he wasn’t.  Go figure?  We’re joining forces and create our own The WiseGuy Diaries table.  Well at least he is.  We knighted him, Prince Solo, in honor of the red solo cups we used and honorably bowed our heads to our newest member, Saint Riblet, as he has such a good soul and plus he sports one bad-ass fedora and he wears as well and proud as an Elway Super Bowl helmet .

I looked up at the Nuns, ( new name for Big Red and The Rican ), seated above the railing across the aisle as I cleared the suds from my eyes then looked back and ever more closely at the program.  Spying the bolded numbers which were the Beyer Speed Figures, my head swiveled to the right to eye what the same line read on the Form.  I couldn’t believe this believing it had to be a typo.

Flipping the pages randomly, I stopped at another race in the Form and went directly to the first horse’s last race Beyer number, “62,” I announced.  I flashed the pages in the program and stated, “58!” 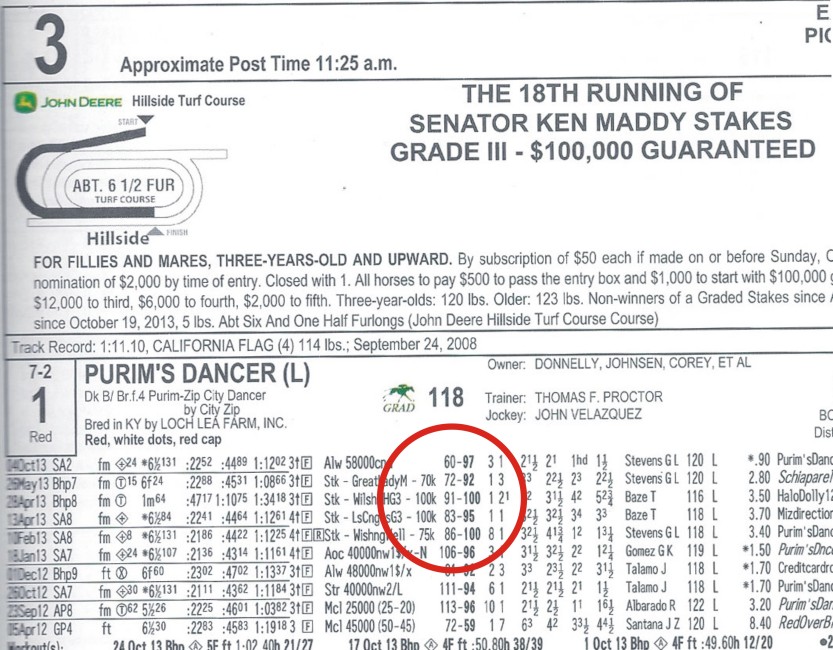 “Well that’s just not right.” he said, “You should call DRF and tell them that’s bullshit.  How am I supposed to tell which one is right.  I have a special way of doing this and I have to have the right numbers.”

“Me too.  I used the Form’s numbers.  They must be wrong because I can’t win anything.  I couldn’t pick you out of a room full of penguins,” my voice raised, “I’m calling the Form when I get back.”

Pinkalot agreed by just nodding his head and then finalized the conversation as he turned toward the track and leaned on the aisle’s railing, “This is bullshit!  Make sure you tell them that when you call.”

“I will, I most certanily will,”  I too turned toward the track.  “I want my money back!”

We both nodded again in agreement like two horses head-bobbing to the finish line.

Well, the day went on and we hit a few and lost a few.  We gathered down by the stretch and took our traditional 365 Club picture and drank one last pint as the Cup Classic went off. So exciting to see Gary Stevens win on Mucho Macho Man.  He is such a nice and talented man to admire.  His brother, Scott races at Turf and is also one of my admirations.

I met Gary at the Preakness as he was staying in the same Marriott and happened to pass by us in the bar.  He couldn’t have been any nicer as he took several pictures with us and went up to his room.  If I saw him again I would point out the issue with the numbers and maybe he could get this fixed.  I met Scott when I was trying to find Bob Yeager, my Dad’s first jockey.

Along with the excitement, I was saddened to hear about Jockey John Velazquez undergoing surgery to have his spleen removed hours after he was thrown from his mount, Secret Compass and its demise.  Those spills ruin my day usually.

I was also in disarray for Juicy Sexy as he didn’t hit anything near as what he scored last year.  He lost by a take down from 1st to 2nd and ran second in the cup by a nose. “You’re not using the Beyers are you?  Because if you are, they are wrong?”

He nodded as if he was but I knew he was using the patented Juicy algorithm , ‘It looked at me’ handicapping method.

The very tall, Sir Pinkalot looked at me again.  “Make sure you tell the Form, that’s bullshit!” as he slugged down the last of his beer.

This time we drove from Phoenix and for some reason the trip back is always longer.  Must be because it’s so familiar.  We stopped at Quartzite to get another pack of deliciousness at Daniel’s Really Good Fresh Jerky store by the Burger King get off, then grabbed some gas and made it home safe.

The next day I was finishing picking up things in the backyard when I looked up and saw a thought bubble above my head with Sir Pinkalot’s face in it saying, “This is bullshit.”  I stopped what I was doing and immediately went inside to make that determined phone call.

“Daily Racing Form, how can I help you,” the friendly woman’s voice asked.  I imagined she too to be beautiful.

“I need to talk to someone about the discrepancies in the data, specifically the Beyer Speed Figures, between the Official Breeders’ Cup program and the Form I bought for $5.50 on track which would have cost me another 50 cents if I wasn’t at the track.  Which by the way I don’t understand.”

“Are you talking about the free program that is handed out to all who enter and the DRF tabloid which you buy?”

“Yes, exactly.  We found an error in every horse.  In the Form it says 90 and in the program it would say something different like 85.  We can’t do any handicapping if we can’t depend on those kind of details.  You know, the Devil is in the details?”

“Sir, I understand totally but what you don’t know is the numbers in the Official Program are Official Equibase Speed Figures and in the Form are Andy Beyer’s Speed Figures.  Of course they’re going to be different.”

The only word out of my mouth just as the thought bubble popped with Sir Pinkalot’s face, which was now tucked neatly inside his black cowboy hat, was, “Oh.”

You could hear her take a breath on the other end, “Sir, , , just asking, and no disrespect at all, but by the way, are you a novice?”

And a special shout out to Queen Tiny Mom for making such a great kid. . .