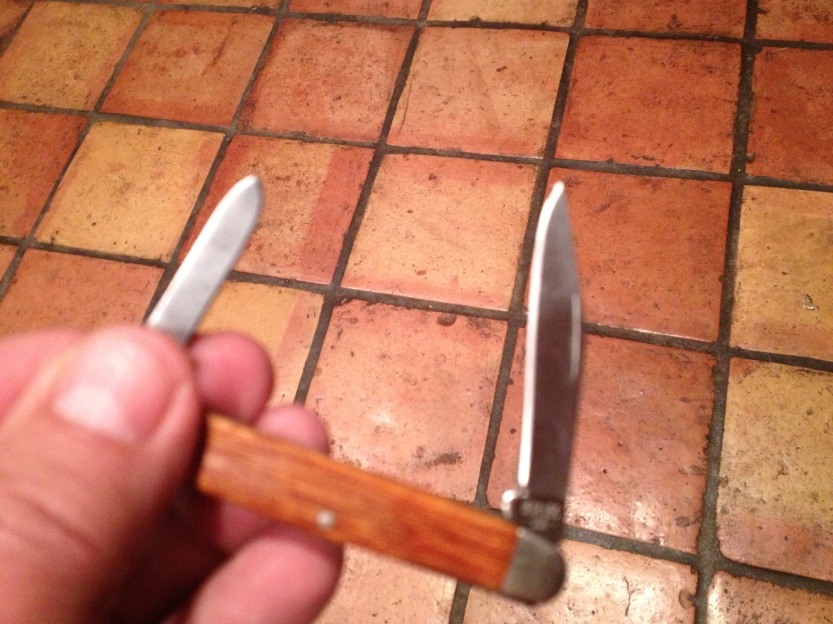 Stop right here if you haven’t read, Pocket Knife, first do it by clicking here . . .

I really can’t believe it but some of the little things in life that happen to me makes the most difference to me personally.  C’mon, you have to notice this for yourself too on occasions.  I say, “Love to live your own stories,”  no one else owns them like you do.  So,

The story, Pocket Knife, on the WiseGuy, made such a difference in my life it’s hard to understand or inexplainable reasons.  The story also struck a spark in my wife, Kim, as once she read the story I had written, she started thinking about the magical knife.  Little slivers of memory began to come back to her, subtle glimpses of remembrance.

You see, Kim has special places and always has had them.  Secret hiding spots, unknown buried treasures and her own personal safety deposit box not even the bank knows about.  The pocket knife in the story, for which I thought was forever lost tore at her inner being for days.  She now says she remembers seeing a flash of Damascus silver steel somewhere in a dark forgotten place where she’d put it but couldn’t remember where she exactly placed it.

A secret space built into a seemingly normal drawer, a hush-hush with the added pursed lips softly saying, “Shhh.”  An envelope taped to the bottom of a shelf for only me to read if something should happen to her and I’m the only one left.  She had felt the depths of the WiseGuy reminisce abyss.

Hey, , , this would have been easy for me to make up a story of how it returned heaped in wizardry yet cautious of any sleight of hand.  Or something simple like a person who accidentally stumbled on and read the story causing them to remember where it was and returned it to me.  But the truth is concrete and lasting.  The WiseGuy is all about the truth.

After days of searching the treasure maps in her head, much like the Arlington Love Letter, she dug up the last shovel full of evidence, reaped the trove to her possession and said one word to me late this night.  “Billy?”

I was watching some dribble on TV, although I do like The Voice, as I casually yet using my most hillbilly accent ever, answered her as I set the blueberry beer, Purple Haze, on the end table, “What?”  I drew the W-sound out as far as my breath would last.

Without me knowing, she had covertly walked into the room and stood behind me.  My neck made a cartlidge grinding sound as I forced my head around to see her silhouette.  A glow backlit her as she held her closed fist out for me to see and recieve whatever gift she had hidden in her hand.  An offering from the Boss and she spoke clearly, quickly and with distinction, “Here.”

Dang, and all this time I thought the tall kid lost it.  My mouth is getting dry from being open so long. . .

12 thoughts on “Once was Lost, Now is Found”