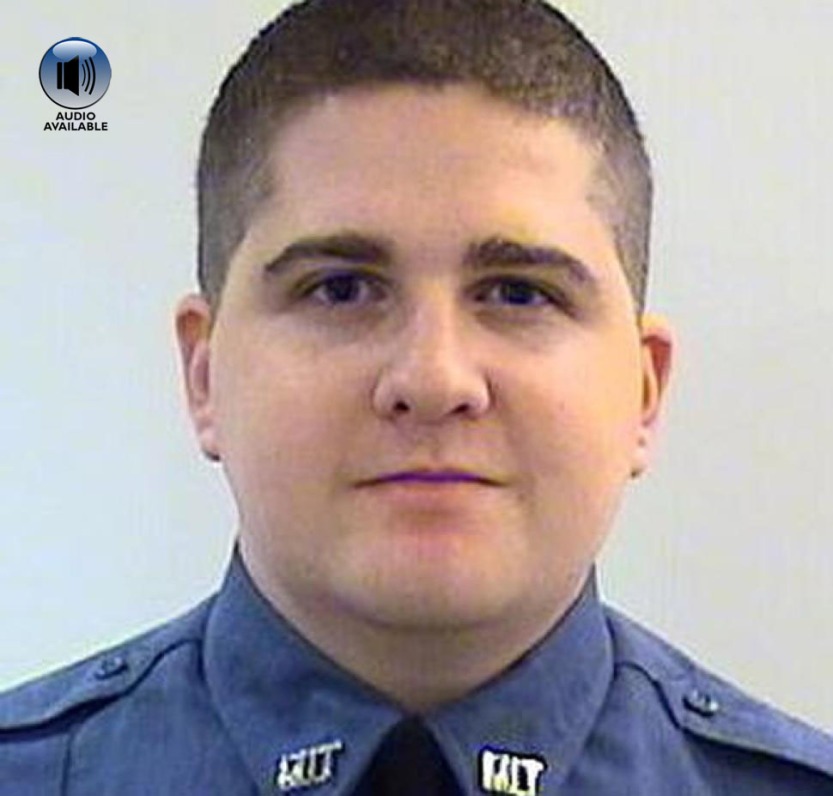 To LISTEN to the audio short story, press PLAY>

The other day, someone whom I adore made mention to someone else how, ‘they didn’t like cops’, because they get to do things the rest of us are not privileged to do only because they’re the law.  This common paradox within our society today intrigued me to the point of wanting to talk about it in a few insignificant and meaningless words.

You know, I think I have said the same thing only because one or two cops, in my entire life, have caused me grief whether it was a ticket, ( I obviously did not deserve ), or some smart ass reply directed my way when I interfered with their presumably mundane day.  Shame on me for being so presumptuous.

After the Boston bombing and seeing the mountains of videos and photos of who was running toward their possible death and those running away, one photo in particular showing an officer, defensively positioned over a fallen elderly man, who was obviously in distress, and shielding him in a firm protective stance.  This photo made me now become something of a different man.  I asked myself, ‘Which way would I run?’ 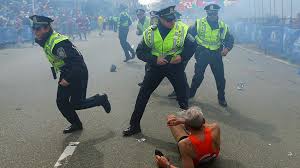 What if it meant your 10-year-old growing up without a Dad or Mom.  What if it meant never to be able to say I love you to your wife, sister, brother, son, daughter, cousin, mom, dad, or even your dog?  What if you had to decide all of this in a sliver of a moment?

Would you run toward the fear, the impending doom or decide easily to run away to protect only yourself?  I’m not exactly sure anymore and if I was forced to say which way, I think and hope I would run toward the fear, not just because saying I would is the right thing to say.

Although there was not any fear involved, I have in my life, run to car accidents, I’ve run to dying men who have had heart attacks on the dance floor of their daughter’s weddings, I’ve run to an old man who was dying from being kicked by a horse, I’ve run to co-workers who were injured in the middle of the night but now at my age I ask myself, ‘Would I run away, run far away from the possible mortality if I had to decide?’

You see, I have a family, I have many friends, I have a wonderful grand baby and a very special daughter, daughter-in-law and son, I have the best wife any man could ever dream of in life.  So I ask, would they really miss me?  Would they after time had passed after I have passed, miss me?

I truly think they would and most importantly need to ask myself; do I want to put them through the horrific depression that is the sum for someone else who is left behind?  Answering that question is not as hard as what a cop, a fireman, a utility lineman or all the first responders who act for us, do everyday.  Answering the call is nothing more than being significant, being selfless and having an inner core human desire of wanting and needing to help.

Did you know, cops do it everyday?

Here’s a matter of fact.  Did you know in December of 2012, remember this is near the Christmas holidays, a cop without a second thought in Boston again, threw himself over a railing and fell into the freezing waters of Boston Harbor to rescue a woman who had fallen into the channel by accident.  Accident or not, who really cares, he knew she needed help now?

“I heard everybody screaming,  She’s in the water, she’s in the water,” said Keith Young, a UPS delivery driver who witnessed the dramatic rescue,  “Then I saw the cop pull up.  He jumped out, he ripped his jacket off, ran down the stairs, ripped off his duty belt and jumped into the water and went right to her.  I’ll tell you what. The cop was a hero today. He didn’t think twice about it.”

Do you know what Officer Ed Norton said?

“My buddies are who helped.”  He was speaking of his fellow cops and fire guys who weren’t even there yet when he jumped.  The video shows us he had made the decision and was running toward the fear.

Are you jumping into the freezing, breath-stealing water or are you standing on the warm bank of the sideline and just watch?

Did you know that only breaths before he was fatally wounded in an unprovoked attack, a San Diego police officer performed one last act of kindness as he bought a child some needed food while buying his own dinner of fast food to get him through his night shift.

Officer Jeremy Henwood, 36, stopped at a McDonald’s around 5 o’clock on his day of significance on August 6th.  Store surveillance video showed Henwood speaking with a small boy and buying his food shortly before leaving the store at 5:30.

Shortly after that, Henwood, I should call him by his first name, Jeremy, as that is who he was, was shot to death, point-blank with viciousness while sitting inside his patrol car at the corner of University Avenue and 45th Street.  Jeremy had only made it six blocks from the McDonalds after enjoying a Big Mac or something from the fast food joint; it would be the last place he was seen alive, breathing, talking and being what we all want to be at least once in our life, significant.

Witnesses said an evil and cowardly man pulled up on his side of his cop car and shot him with a shotgun.  Massive wounds from such a violent attack ended any chances for him to have a future with those who he loved.

Young Jeremy passed away at Scripps Mercy Hospital at exactly 1:42 a.m. on Aug. 7, because he was a cop.  What were you doing at that exact moment in your life?  I was probably not paying attention to anything and tucked in securely in my bed.

Did you really know that the police officer who was wounded while chasing the Boston Marathon bombing suspects lost all of his own blood and, for 45 minutes, his own heartbeat, after being shot in the thigh.  Hey what the hell you might say because Doctors believe he will make a full recovery.  So what’s the big deal?

I’ll tell you what the big deal is.  This Massachusetts Bay Transportation Authority Officer, named Richard Donohue Jr., 33, drove or ran toward the bombers and suffered a severed femoral vein during an exchange of fire with them.  He has a six-month old boy.  His boy doesn’t even know him yet.  That’s a big deal!

Dic Donohue, was wounded early that Friday morning, when he raced to help MIT and Cambridge police as they chased the Boston Marathon bombing suspects to the corner of Dexter and Laurel streets in Watertown.  No one knew whether Donohue knew then that his friend and MBTA academy classmate, Sean Collier, an MIT police officer, had been killed earlier, allegedly by the suspects he was now chasing.

A shoot-out ensued, during which a bullet ripped through Dic’s right thigh, hitting both branches of the femoral artery and the femoral vein. The gunshot drained his and his family’s life out of them, one cup at a time.

So easy it would have been for him to ease off the pedal and lose the crazy Chechen terrorists and then go home.  Would I have slowed down?  I hope not.

How would they have known that the friendship would someday and forever be linked by a horrible tragedy.  Sean was sitting by himself when he died.  He might have been typing something on the laptop, or just texting family that he loved them.  Boston police say the Tsarnaev brothers ambushed him while he responded to a disturbance on the MIT campus late Thursday, three days after the deadly carnage at the Boston Marathon.  He was hit five or six times. His gun was still in the holster but earlier when it mattered, he went toward the danger.

Look closely at Sean’s eyes in this photo.  What do you see?  I see intense and overwhelming pride.  I’d want him to run my way if I needed him.  I’ll bet my entire life savings that he liked cops and he was only 26 years old.  C’mon! 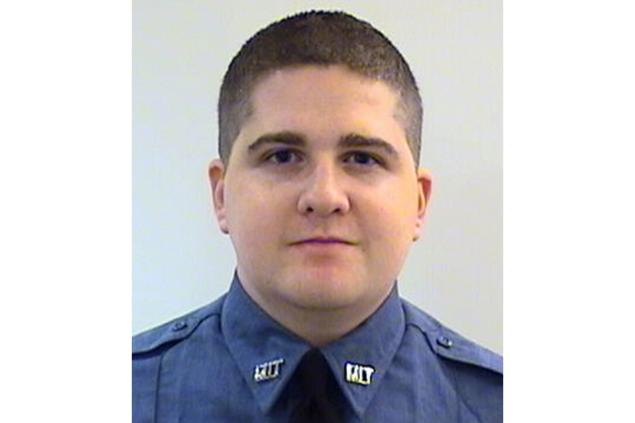 So now when you sit at home, in the warmth of your family life, with your loved ones around, or even by yourself, with your nice, secure and safe job or even an un-nice, insecure and unsafe job, as some of us have, think about this next time you’re here to kiss your children, your wife, your husband, your girlfriend, your boyfriend, your friend, or your mom and dad and be able to just reach down and pet your dog because today, you know you don’t have to decide, in a moment of life or death, which way to run?

Then as you’re lounging comfortably on your easy chair, close your tired eyes and think about this.  Think about buying someone a Big Mac just for the fun of buying a tasty and filling Big Mac, for anyone who might be hungry, just like Officer Jeremy did.  And if this also comes to mind, ‘I don’t like cops.’

Leave a Reply to The WiseGuy Cancel reply